On Saturday, November 19th, the City of Barrie celebrated its 16th annual Santa Claus Parade.  I've been to watch the parade in previous years, but this year, I was priveleged to be a part of it!

When I was a child, I used to watch the Toronto Santa Claus Parade on TV and I remember wishing I could sit on one of those floats, wearing a costume, face painted, waving hello, shouting, "Merry Christmas!".  This year, my wish came true, only instead of taking part in the Toronto parade, I took part in the Barrie Santa Claus parade, in the small city where I 've been living for the past four years.

My husband, Nuno, is a member of the Barrie Bass Masters fishing club.  He is responsible for media and promotion  This year, he had the great idea of entering the club in the Santa Claus Parade.  It was a great way to connect with the citizens of Barrie, to create awareness, and possibly attract some new members, as well.

I was hoping the previous day's snow fall could have stuck around for the festivities, but due to the sunshine and milder temperatures, all traces of snow melted before the parade began.  Saturday morning was sunny, mild, and beautiful.  Nuno, the girls and I went to a couple of Christmas bazaars at two of our local churches after our breakfast. 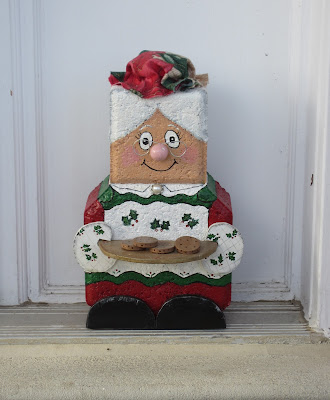 I found this adorable Mrs. Claus holding a tray of chocolate chip cookies.
Can you guess what she's made of?  It's a brick, painted and decorated
to look like Mrs. Claus.  She's now standing just outside our door on the porch.
I've never seen anything like it.  I couldn't resist!
When we got home, we decorated Nuno's bass boat (our float) with Christmas lights, garland, bows and ornaments.  It was a team effort and everyone helped.  Lucky for us, the weather couldn't have been more perfect for doing that sort of thing. 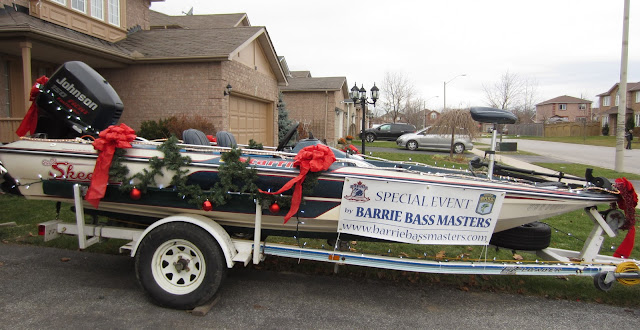 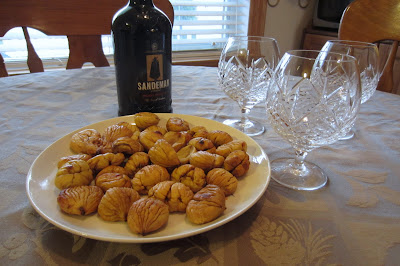 I roasted some chestnuts in the oven.  Here they are - peeled, still warm and ready to eat! 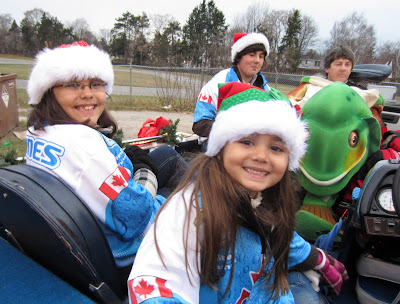 On the boat, on our way to the parade route 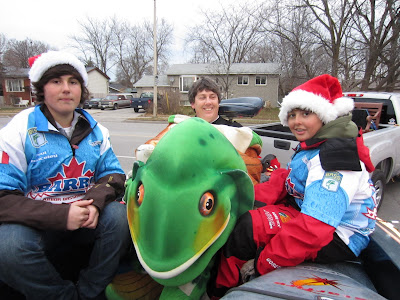 Here are two junior bass masters - Paul Spenceley and Cole Vardy.
In the middle is Dave Norgrove, dressed as mascot for the parade. 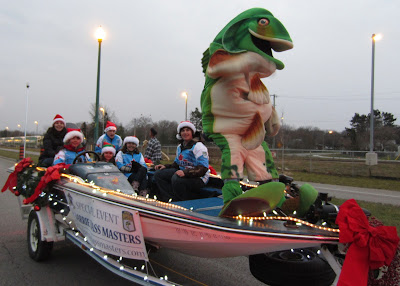 Here we all are, behind the other floats, waiting for the parade to begin. 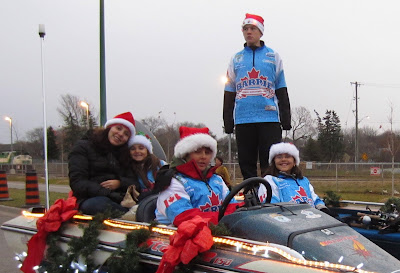 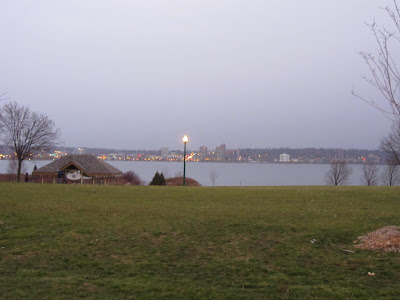 View of Kempenfelt Bay from where we waited.
Before I go on, I must tell you, showers were forecast to begin around 5 pm that evening - the exact time the parade was to begin.  Sure enough, true to the weather station's word, it started to rain, as you can probably tell from the above photo.  We were lucky, though, the rain showers were light and would come and go quickly.  I was too thrilled...I barely noticed! 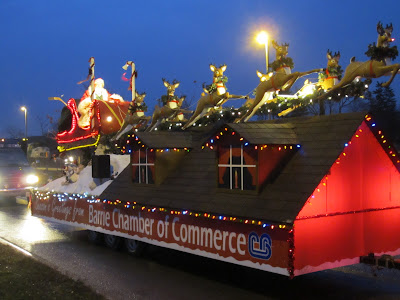 Here is Santa's float, right behind us!  Ours was the second last float in line.
And off we went... 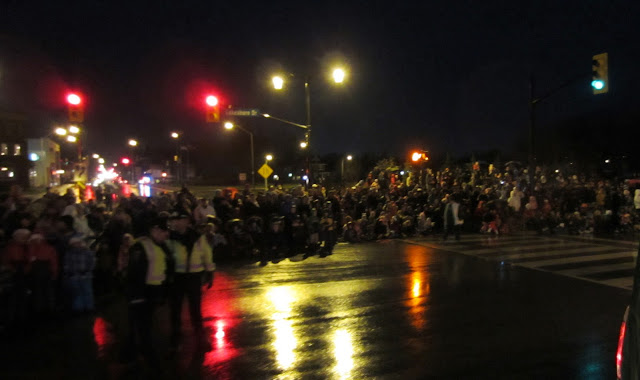 Look at all the people!﻿ 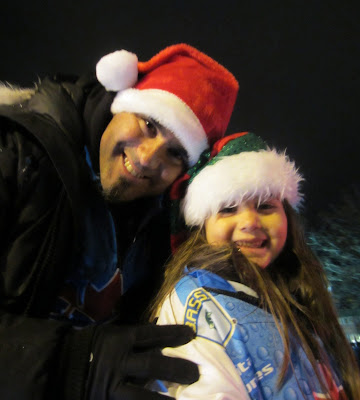 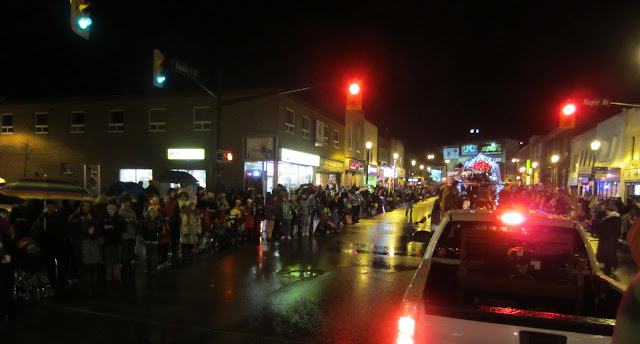 This is the truck that pulled our float.  Brad Hudson, a bass member, and his wife
drove us along the route. 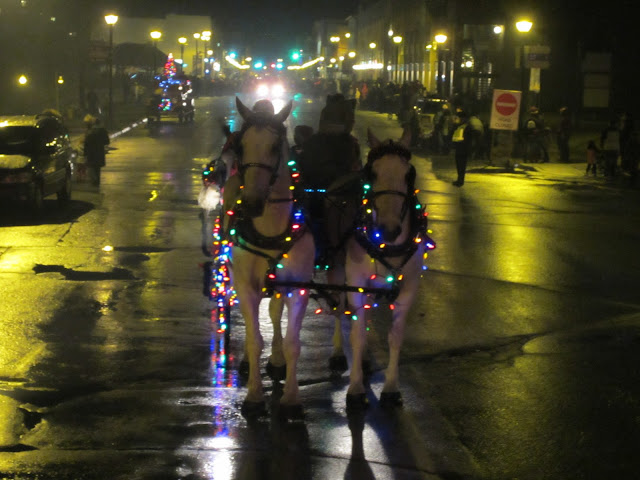 These fancy horses were walking between us and the Santa float.  Aren't they beautiful? 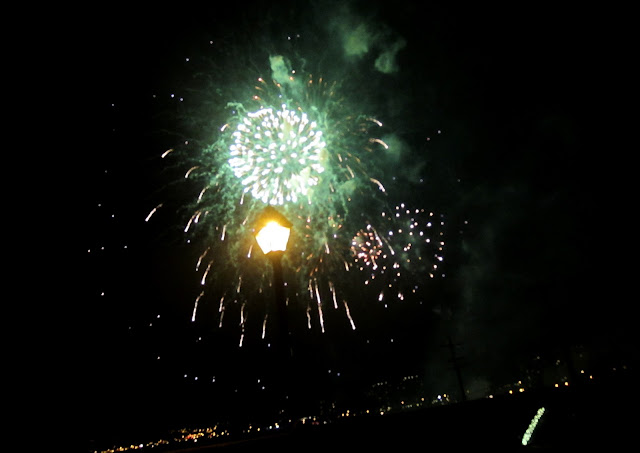 Once Santa arrived at his final stop, we were treated to a beautiful fireworks
display over Kempenfelt Bay. 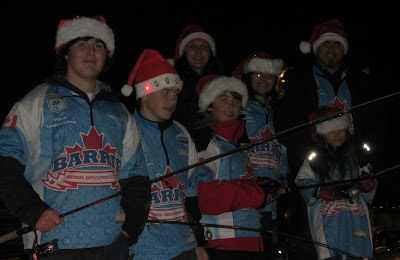 All of us on the float, including junior bass masters:
Paul, Mark, and Cole 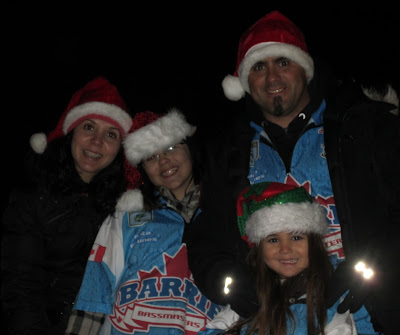 I truly enjoyed being a part of this special day.  I will never forget the sheer joy I felt when I saw the crowds, all along the parade route, adults and children, waiting to see the floats and of course, Santa Claus.
Certain scenes just "stuck out" at me, like these three little girls sitting on a blanket under a huge umbrella and parents and grandparents holding tiny babies, already sharing with them, the magic of the season.  I wish I had been able to capture those moments on camera for you.  But, with all my waving and greetings, it was nearly impossible.
I would pick out certain people in the crowds and say "Merry Christmas!".  Some were children, some were adults, and you could see how happy they were to return the greeting.  It was as if they were waiting for me to say it all along.
Christmas is a magical holiday.  We can't find magic in a present, at the mall, on the street corner, or anywhere else, for that matter.  The real magic can only be found in our hearts!   The spirit of Christmas lives inside our hearts, and in the hearts of those who believe!
I have a short video from the Santa Claus Parade to share with you, but unfortunately I'm having trouble getting it to upload.  If I can figure it out, I will post it later.
"He who has not Christmas in his heart will never find it under a tree."  Roy L. Smith
Posted by Rosinda at 11:04 AM