Annabel woke up with a fever and a sore throat, so she couldn't go to school today.  Anita, however,  was feeling good and got ready for school, as usual.  Out of the blue, she tells me she could walk to school on her own.  I wouldn't have to drive her today, since Annabel was home sick.  I, of course, made up any and all excuses as to why I should drive her.  She explained how all of her friends walk to school on their own and why can't she?  It really took me by surprise.  I knew the day would come eventually, but I wasn't quite ready for it yet.  To be honest, I'm not sure I would ever be ready for it.

I thought things over in my head; things like, "After all, she is days away from turning twelve.  I have to let her go sometime.  I don't want to hold her back, but what if something happens to her, but what if she doesn't get there...but, but, but".  Anita said, "I know you love me and don't want anything to happen to me, but I'm going to be fine, Mom".  Deep down inside, I knew she was right, but I just kept fighting it.  I finally gave in, with a heavy heart, "Fine...you can go.".

I called Nuno to see what his thoughts were.  He agreed with Anita and said I was doing the right thing.  So, I let her go...

It was time.  I went to the door.  Anita gave me a hug and kiss.  She said, `Have a great day, Mom.  I love you.  I`m going to be fine, don`t worry."  I said, "Okay, I love you too." and stood there in disbelief.  She walked out the door, down the steps, across the driveway and onto the sidewalk.  I closed the door slowly and peeked at her through the crack.  Tears rushed down my hot cheeks as I saw my girl walking quickly and confidently with a spring in her step; her hair bouncing from side-to-side.

I swung the door wide open; hoping she would turn around to look at me, possibly run back and say okay, Mom, maybe you should take me to school, but she never did.  I watched her from the door until she disappeared from view, with a heavy heart.  Memories came rushing back to me, of days when Anita wanted me to wait with her at the school until the last possible second before the bell rang. She would rather wait with me than go to the yard to play with her friends.  It doesn't seem like it was all that long ago.

Time passes, things change, Anita's growing up and there's nothing I can do to stop it.  I called Nuno immediately and cried my heart out.
Posted by Rosinda at 9:58 AM 15 comments:

Thank you to everyone who participated in my 100th post  giveaway!  There were sixteen entrees in total.  Click on the link to see the draw for yourself...


I wish everyone could have won, but unfortunately there can only be one winner!  I hope to hear from XXXXXXX very soon!  Congratulations, sweetheart!  I am so happy you won!

Happy Saturday to all!  The sun is shining here, and it's a beautiful spring day.  I hope it's lovely where you are too.    Have a wonderful weekend, everyone! xoxo 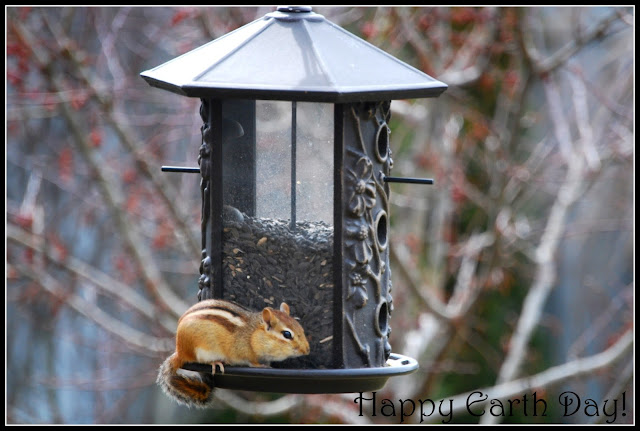 Like the trees, we are visitors, guests of the earth - Kim Stafford

Happy Earth Day, everyone!  It's a beautiful morning here in Barrie.  The sun is shining, the sky is blue and the temperature is slowly warming up.  The brown grass is beginning to turn green, the buds on the trees are growing, and daffodil bulbs are beginning to sprout!  The robins, house finches and American goldfinch have returned as well!  It is really starting to feel like spring...finally!

In celebration of my 100th post, I am doing a giveaway this week!  Why?  Because I want to thank every single one of you for taking the time to stop in and read my posts.  I want you to know how much I appreciate your comments, as well.  Hearing from you lets me know that yes, someone out there is reading what I have to say.

Thank you,  to each and every one of you!

I will be giving away... 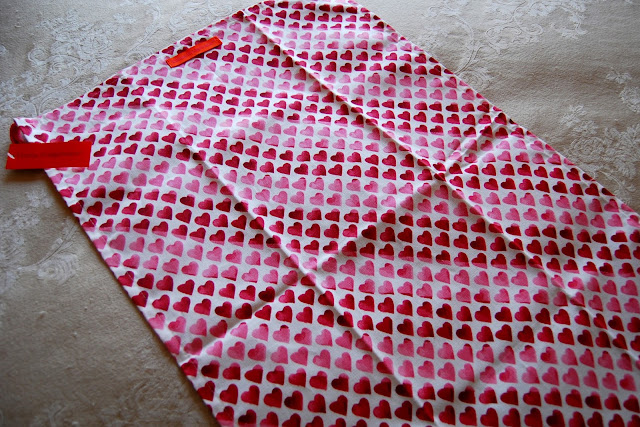 this beautiful 100% cotton Emma Bridgewater tea towel in the pink hearts print;
with love, from my kitchen to yours! 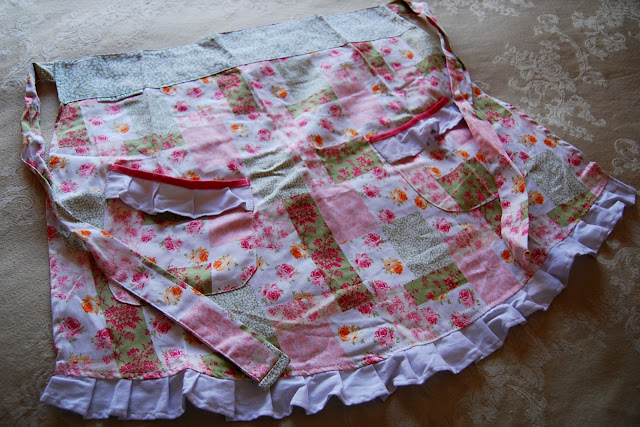 And this oh-so-pretty 100% cotton Laura Ashley half apron.  I removed it from the packaging to photograph. 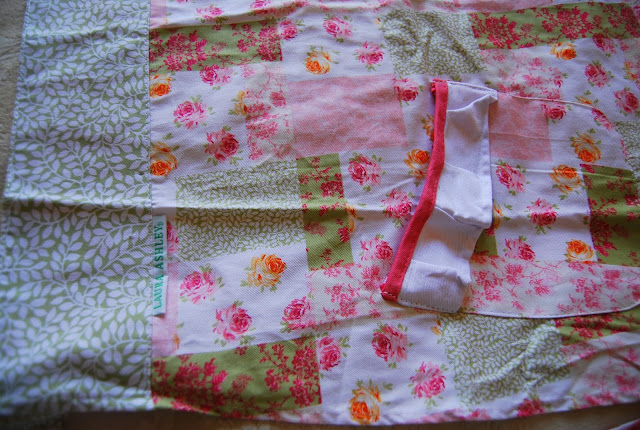 Here is a closer look at the waist and pockets.  It's a patchwork print with pretty roses all over it.  I love it and hope you will, too! 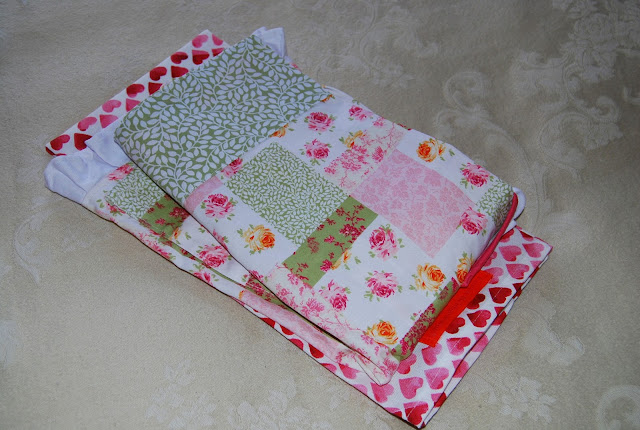 I will put both items in an bubble envelope and send them off to the lucky winner.

All you have to do to enter the giveaway is to become a follower of my blog, if you haven't already, and leave a comment at the bottom of this post.  It's that simple!  Anyone can enter, no matter which country you live in.  I will be putting participants' names in a hat and will draw the winner on Friday!  Results will be posted that day!  Good luck!

I will leave you with this picture... 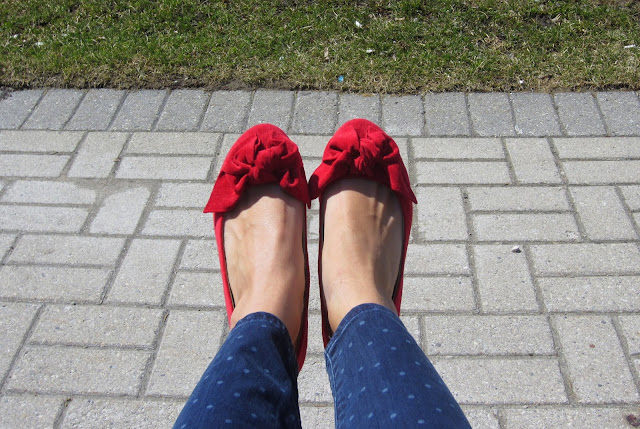 This is me...enjoying the warmth of the sun on a park bench on a warm spring day!
I feel so blessed and thankful.  Hope you are smiling, no matter where you are or what you are doing!
Posted by Rosinda at 12:26 PM 34 comments:

Happy National Grilled Cheese Day!  What better day to make a grilled cheese sandwich than today!   I found out it was NGCD just this morning, so I decided to make grilled cheese sandwiches for lunch.  I used whatever cheese I could find in the fridge.  I happened to have Camembert cheese, but you could use brie too; the two are pretty much interchangeable.

Here is my recipe for a gourmet grilled cheese sandwich...

Camembert Grilled Cheese with Caramelized Onions (for one) 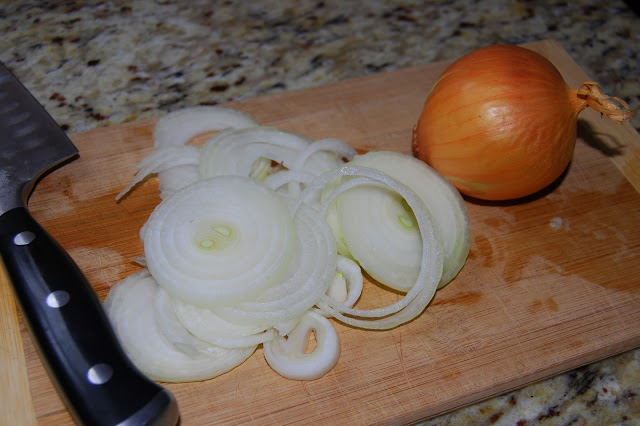 To make the caramelized onions, melt 1 tablespoon of butter in a skillet over medium heat.  Add the sliced onions, salt and pepper. Stir over medium-low heat for approximately fifteen minutes until onions are soft and golden brown.  Remove from heat and set aside. 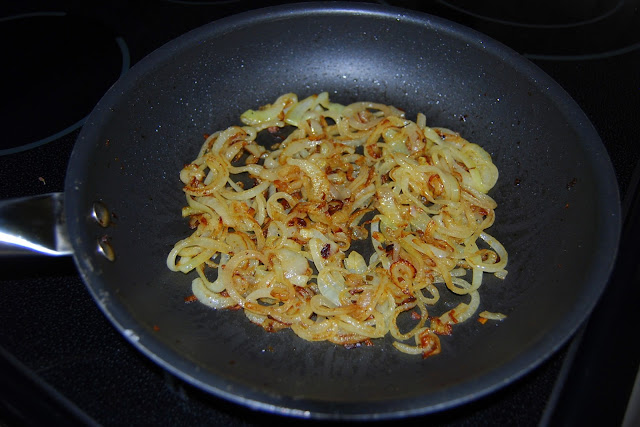 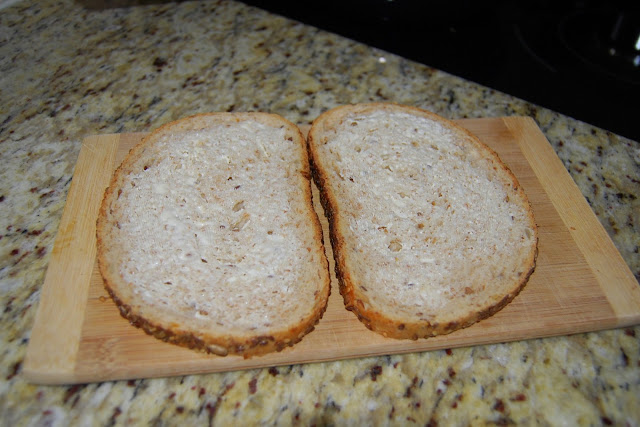 Next, butter just the top and bottom side of your multi-grain bread (only the sides you will be grilling). 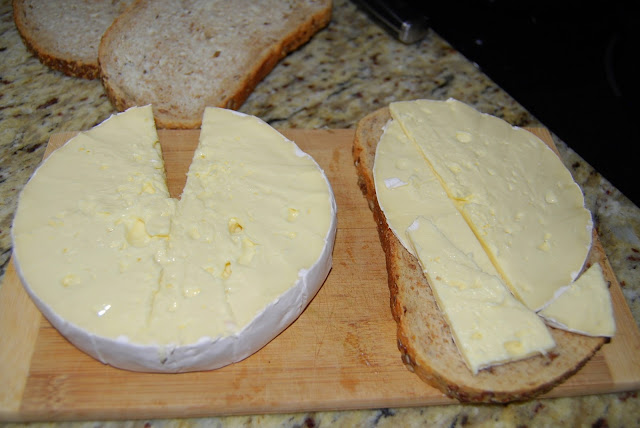 Cut the cheese horizontally to cover the entire slice of bread (as you can see, my Camembert had been cut into before). 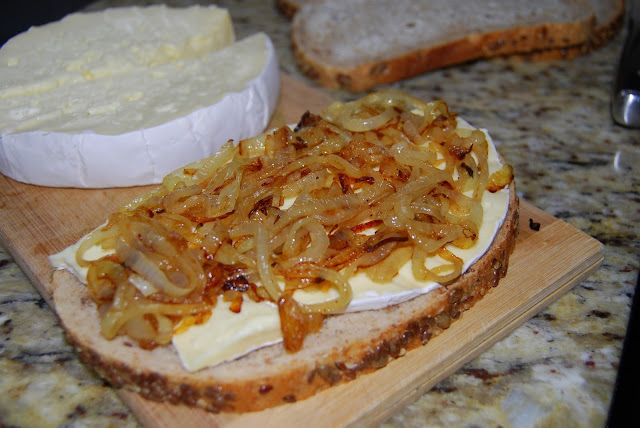 Add the previously caramelized onions to your cheese.  Cover with buttered top slice. 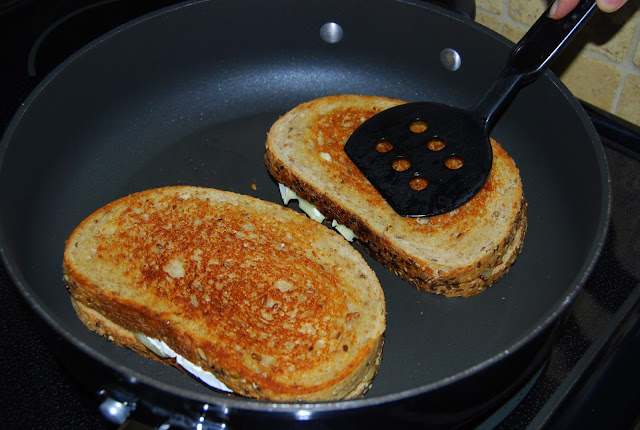 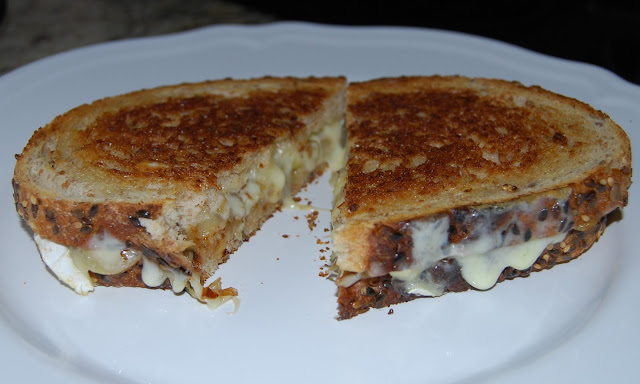 You can serve it on a plate like this... 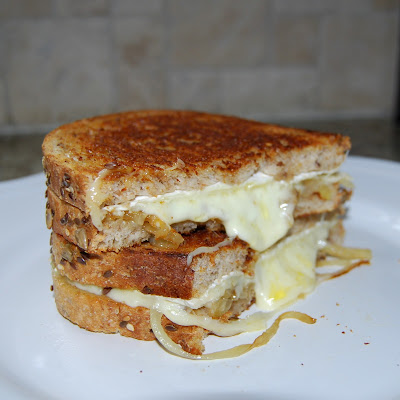 It was the perfect lunch for a day like today!   We've been hiding indoors from the ice and cold.  Here are a few pics I took this morning from last night's ice storm. 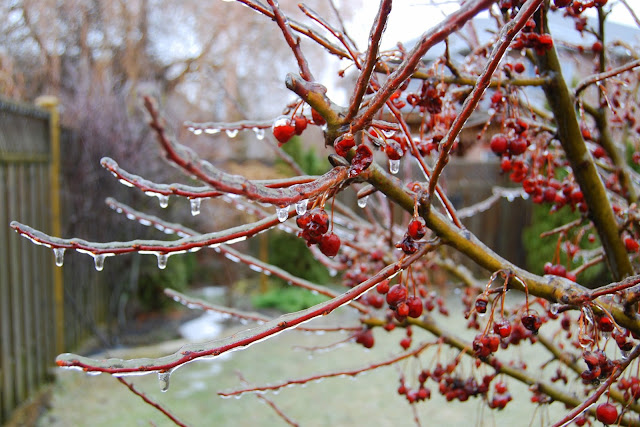 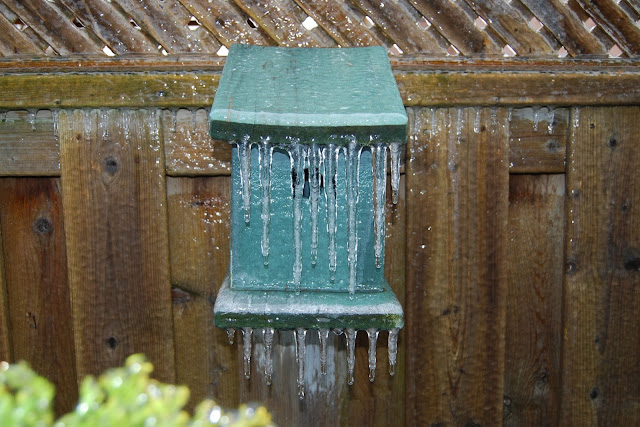 Looks more like a jail, than a bird house now 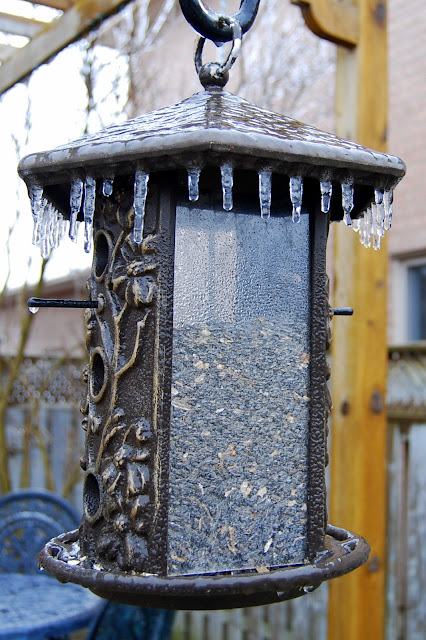 I wanted to tell you, also, that this is my 99th blog post.  My next post will be my 100th!  In celebration, I will be having a give-away, so stay tuned for that!

Happy Friday, everyone!  Thank you for stopping in.  Hope you all have a wonderful weekend!

The Full Worm Moon, the Return of the Robins and Spring!

Every month, I look forward to seeing the full moon.  I love how each full moon has its own special name and significance.  The early Native Americans are the ones who gave the moons their unique names.

The last full moon occurred on March 27, 2013.  I was lucky enough to see it that day; in the early morning hours, when it was still dark out. It was so bright and beautiful.  I remember calling Nuno to come see it outside our living room window before he went off to work.  Unfortunately, I didn't get a picture of it that morning and later in the evening, when I went looking for it again, it was hidden behind the clouds.

I don't always see the full moon, of course. It all depends on how clear the sky is that day.

But, I do have a photo of last January's wolf moon... 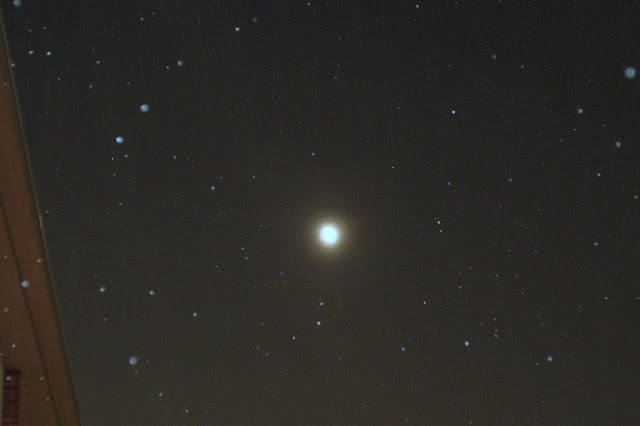 I remember it being very cold and it was snowing that evening.

And this is a photo of last December's Long Nights Moon 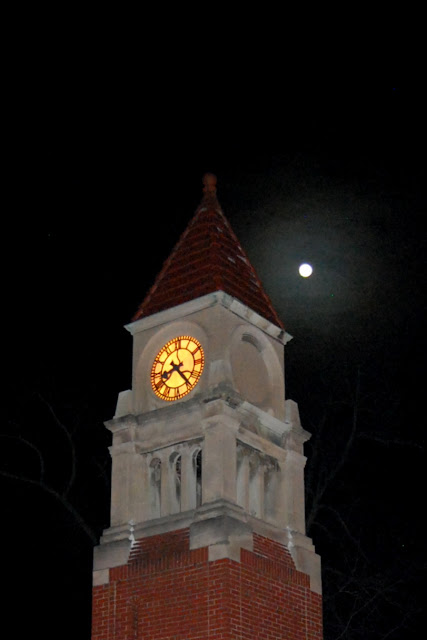 I took this photo at Niagara-on-the-Lake, on the eve of my birthday!

As I mentioned before, I don't have a picture of last month's full worm moon to show you, but I can tell you how the name came about, according to the old Native Americans.  In March, the temperature warms up and the snow begins to melt. In turn, the ground softens up and the worms start to appear.  And you know what that means, right?  The robins come back to pronounce it's spring! 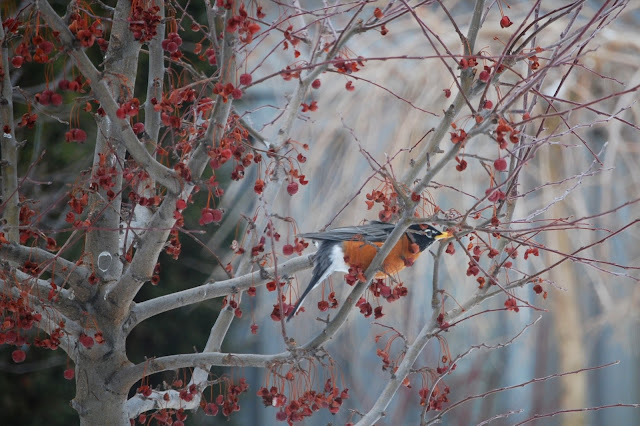 On Wednesday, my first spring robin appeared! I found him in our crabapple tree!

He came to announce the arrival of spring.  It's not official until the robins return.  And they're here!

I found another one hopping around in our yard this morning... 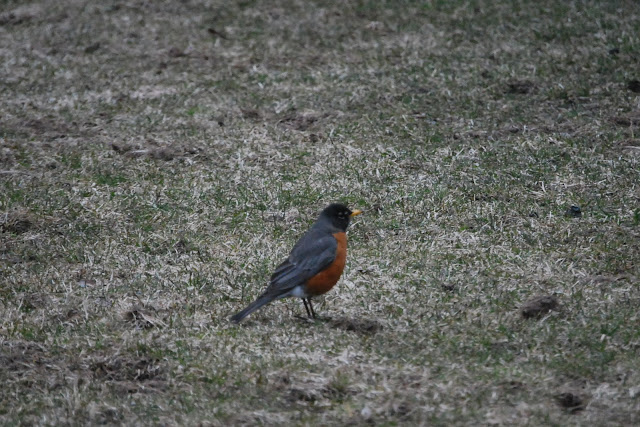 This sweet pair of house finches were out there this morning, too. 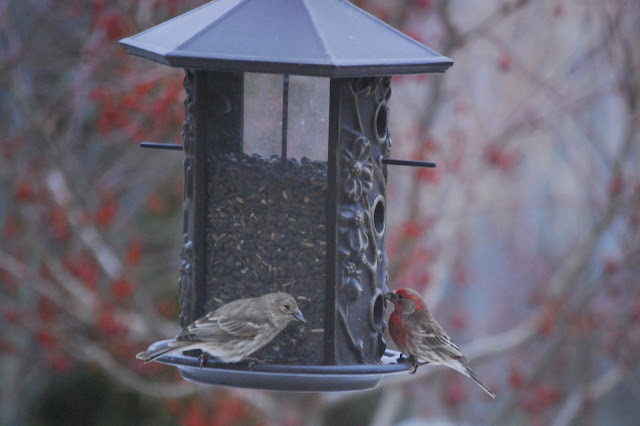 And look who's back!  It's Chippy! 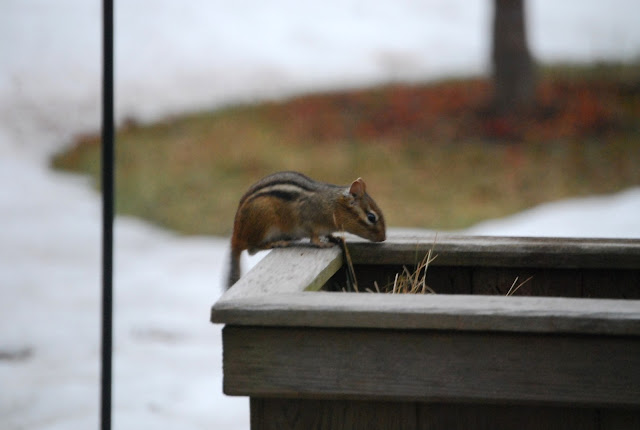 I'm not sure if it's the same one from last summer.  Do you remember him?  We had him eating peanuts from our hand, which reminds me, I have to go out and buy some more peanuts!

As you can see, the full worm moon was fittingly named.  It has brought forth the return of the worms and robins!  Spring is definitely in the air, although, we still have some stubborn, crusty snow on the ground.  It is quite cold and the wind is still raging and frigid.  But I dream of warmer days, the blossoming of our trees and flowers, and the delicious scent of blooming lilacs.

Wishing you all sunshine, robins, and a happy spring!
Posted by Rosinda at 11:54 AM 13 comments: