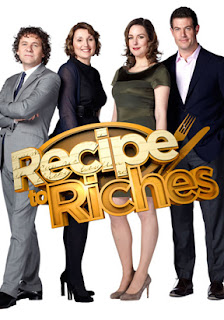 I was flipping through the channels and unknowingly came across the first episode on Wednesday evening, October 19th.  I thought it would be fun to watch the Canadian home cooks, similar to myself, battling for the coveted winning spot.  The first week's category was Pies and Puddings and the winner was Glo McNeill.  Her recipe for Luscious Lemon Pudding won first prize.  I had never seen anything like it, so I wanted to try it for myself!  What's different about it, is that the batter separates into 2 parts, while it's baking.  The bottom turns into a pudding consistency, and the top, into a sponge-type cake.  I went online to do some research, studied several recipes, and came up with my own version. 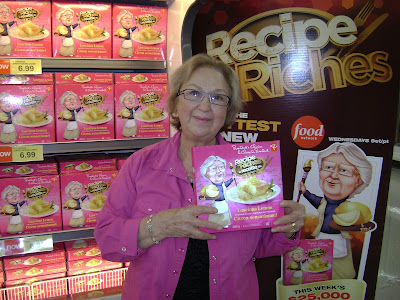 Here is a photo of Glo, herself, posing with her winning recipe, turned PC product!
A day or two after I saw the episode, I tried making my own lemon pudding cake.  I baked it in a square, glass dish, in a water bath.  It tasted absolutely delicious, but didn't look very appealing, once it was scooped onto a plate.  It didn't look as pretty as I wanted it to.  I decided that next time, I would try baking the cake in individual ramekins.
The weekend came around, and I couldn't resist.  Grandma Glow's pudding cakes were being sold in freezer sections at our local supermarkets.  I went to purchase the frozen cakes and baked them for an after-dinner treat.  To be honest, they weren't nearly as good as the home-made one I had baked a couple days before.  The lemon pudding was okay, but the top sponge cake tasted so "fake".  It tasted as though the pudding was placed on the bottom of the oven-safe ramekin, and then a factory made sponge cake round was placed on top.  It was just okay for me.  I'm sure Glo McNeill's original home-made recipe, the one that won over the judges, tasted much better than that.  ﻿
Here was my second attempt at the lemon pudding cakes: 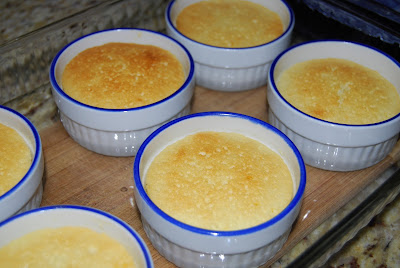 Ramekins, in a water bath, hot out of the oven. 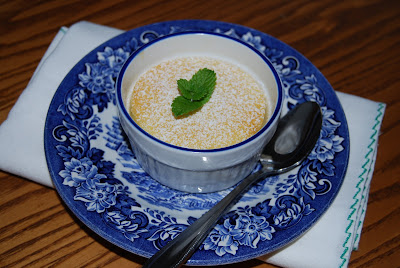 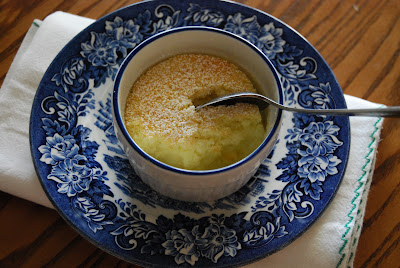 The perfect balance of lemon, pudding, and cake!
I am thankful for the inspiration Grandma Glow's recipe has given me.  I will definitely be making these lemon pudding cakes again.  No doubt about it!
Of course, now I'm hooked on the show.  Last week's category was "Cakes".  I didn't feel particularly moved by any of the three finalist's recipes.  I'm looking forward to this week's category - "Appetizers".  Hopefully, I'll  get some new ideas for my own home cooking!
Have a happy and safe Halloween!  Thank you for stopping by my kitchen! xo
﻿
Posted by Rosinda at 12:14 PM