On Tuesday morning, I brought the girls to school, as usual.  I was standing outside the fenced-in yard talking to one of the other moms, discussing Thanksgiving weekend...things like, "Where did you spend Thanksgiving? Who cooked the meal?  What did you eat?".  When I mentioned that I baked a pumpkin pie for dessert, she said, "Oh, wow, I haven't had a pumpkin pie fix in such a long time!" (I hope I'm quoting her correctly).  She went on to tell me she's the only one in her home who likes pumpkin pie, so she never buys a whole pie, or she would have to eat it all herself!  We eventually said goodbye and wished each other a good day.  As I walked home, I kept thinking I couldn't allow this poor soul to be deprived of pumpkin pie!  Everything in me was telling me to bake a pumpkin pie for this woman.  Was I crazy?  I didn't even know her name!  Then it hit me!

I remembered I had bought a set of mini pie tins at a garage sale this past summer. I still hadn't used them, so I figured I could make mini pies.  The tins would have come in handy the other day, when I baked the pumpkin pie for Thanksgiving.  I wanted to bake two pies, one for us, and one for my brother-in-law, who loves pumpkin pie.  Unfortunately, after I had rolled out the dough, I noticed my only other pumpkin pie dish was missing.  I ended up baking just the one, not remembering that I had the mini pie tins tucked away in a drawer.

Anyways,  I thought I would show you how I make the pie crust, since many people are "afraid", just as I was, before I first started making it from scratch.  I find it gets easier and easier, the more you practice, like most things. 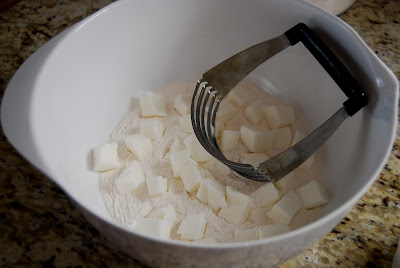 In a bowl, whisk 2 cups of all-purpose flour with 1 tsp salt. Add 3/4 cup of chilled shortening (cut into 1/2 inch size cubes).  It's very important that the shortening be well chilled.  You can even chill the bowl and pastry blender in the refrigerator, to keep the dough as cool as possible. 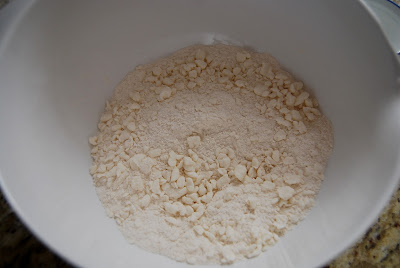 Using a pastry blender (as seen in previous photo), cut the shortening into the flour until you're left with crumbly pieces,  the largest being the size of peas.
To the crumbly mixture, add approximately 6-8 tablespoons of ice cold water (I put cold water in a cup in the freezer before I begin).  By the time I'm ready, the water is ice cold.  Make sure to add water, 1 tablespoon at a time.  Use a fork to incorporate the flour and water, bringing the dry flour on the bottom of your bowl to the top, each time.  You'll know the dough is perfect when it holds together when pressed between your fingers.  It has to be just right, not too dry, not too wet.  I ended up using 7 tablespoons of water. 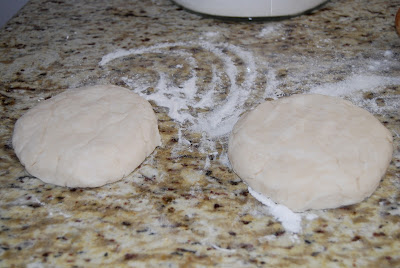 To a clean counter top, sprinkle some flour, gather and press dough to form a ball.  Divide ball in half and into two identical disks.  Wrap in plastic wrap or wax paper and refrigerate for 20 minutes.  You have enough dough to make one 9 inch double crust pie or two 9 inch single crust pies! 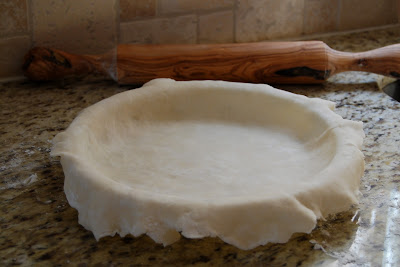 This is my pie crust after rolling it out on my floured counter top, using a floured rolling pin.  Make sure the dough extends 1 inch from the edge of the plate.  I cut around the excess and then tuck in the overhang to rest on the edge of the pan.
Believe me, I am no professional when it comes to baking pies.  I'm just trying to show you how simple this can really be.  I remember being scared of attempting a home-made pie crust, and I want you know it's not that difficult! 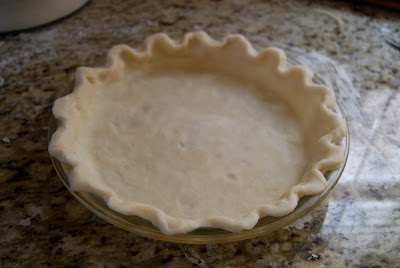 Crimping the pie dough is new to me.  I need more practice, but I'll get there. 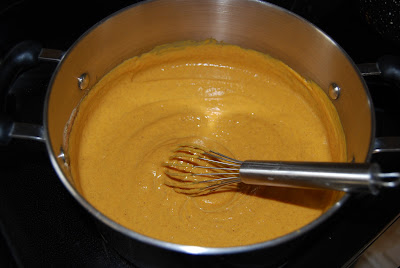 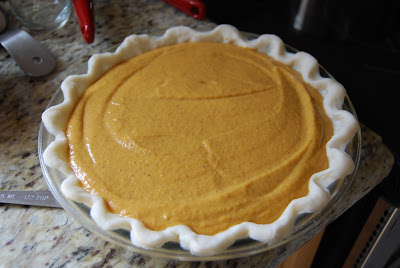 Filled and ready to go in the oven 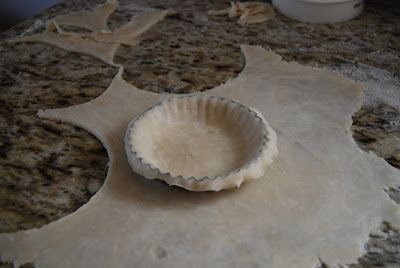 In the meantime, I rolled out the other disk of dough and cut out six circles to fit into my mini pie tins.  I filled them with pumpkin filling and put them in the oven when the large pie was done. 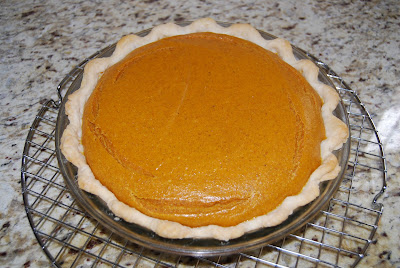 Large pie cooling on a rack 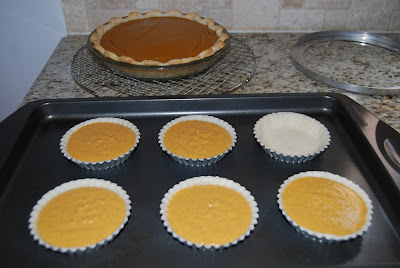 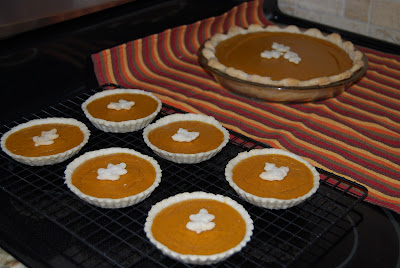 Using the dough scraps, I cut out some tiny leaves to decorate the tops.  Don't they look cute?
I ended up keeping the large pie for ourselves to feed our pumpkin pie loving family.  Not only do I love pumpkin pie, but so do Nuno and the girls.  We've been savoring a slice of pie after every dinner.
Full Moon 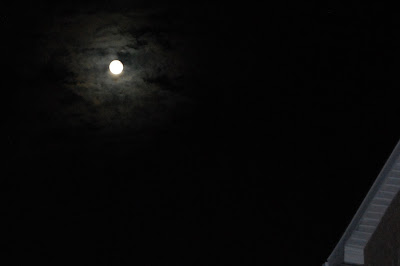 This is a photo of the Hunter's Moon on Tuesday evening.  I took this photo on my walk to our local community centre. 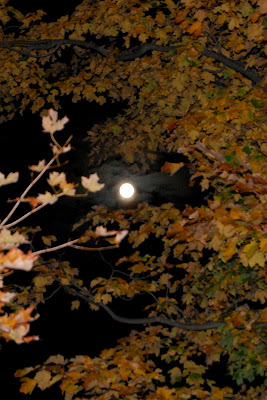 This photo was taken on my way back home.  Isn't it beautiful?
The mini pies were sent off to pumpkin pie lovers.  The mom at the school was so happy with her pumpkin pie!  I only gave it to her this morning because the kindergarten students have school every other day. She said she will enjoy it for dessert, after she eats her lunch.  I sent the last mini pie to school with my niece this morning.  She was one happy camper!
This morning, in my neighbourhood, it is grey, rainy and blustery - a typical Fall day!  I hope you are enjoying the Fall season, no matter what the weather!  Happy Thursday!  xoxo
Posted by Rosinda at 11:18 AM