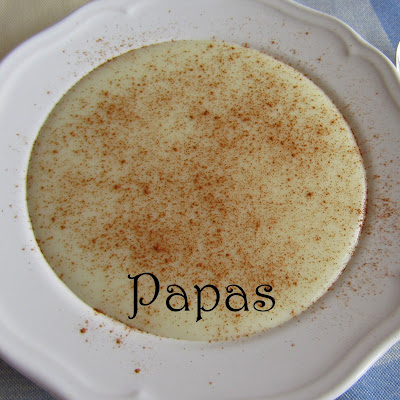 When I was a child, growing up with my Portuguese immigrant parents, my mother used to make something called papas for us (herself, my Dad, and I).  I believe the closest possible translation of papas to English is porridge.

Although I am giving it the name porridge, please don't confuse papas for a breakfast food.  No, it was more an indulgence that could be eaten any time of the day.  It was almost dessert-like...eaten hot with a sprinkling of ground cinnamon on top; the ultimate comfort food for me.

I remember asking my mom to make papas from time to time. She didn't always make it.  After all, it was a special treat and that is part of what made it so good - the knowing that you couldn't eat it all the time.  Papas were usually reserved for special occasions or lazy Sundays when my mom had more time to make it.

As I grew older, my mom didn't make papas as often.  I didn't request it as much.  Other foods and rituals replaced the porridge. Many years passed.  Then one day, after I was married and had my own daughter, I remembered the papas again with fondness.   I immediately called my mom at work. I told her I wanted to make papas myself, for the first time.  I needed her recipe...please!

Well, if you are Portuguese or happen to know a Portuguese mom, you will probably already know that Portuguese moms don't usually follow recipes, measurements or directions.  If you ask for a recipe, you are more likely to hear, "Oh, just add a bit of this and a smidgen of that.  That should do it!".   So my mom gave me a list of all the ingredients and tried to guide me somewhat with the measurements. I had to play around with it myself until it was perfected.

More years passed. The memory of those childhood papas came to me again this week.  I haven't made papas in what seems like forever.  I looked for the small, pink piece of paper I had written the ingredients on years ago, in my recipe box.  I found it, but only the ingredients...no measurements.

In a small pot, add milk.  Whisk in sugar, flour, and salt.  Combine very well until smooth.  Place the pot  over medium heat and keep whisking until mixture begins to boil.  This will take several minutes.  As it starts to boil, continue whisking for about one minute and then remove from heat.  Mixture will continue to thicken.  Pour the papas into two dessert plates.  Sprinkle ground cinnamon over top.  Serve immediately. 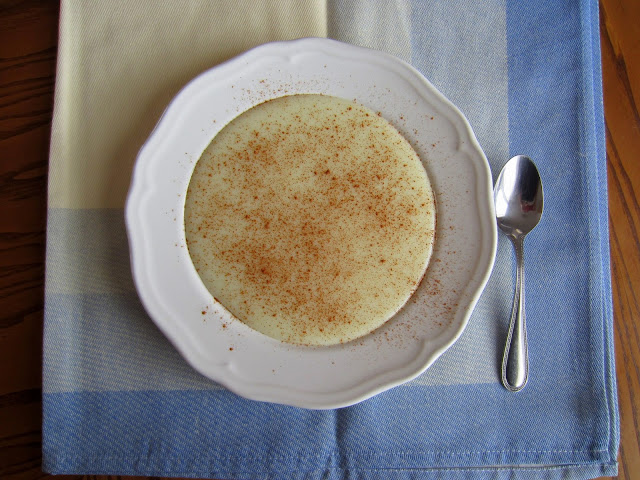 *Papas are traditionally served on a dessert plate, not in a bowl
(at least that's how my mom used to do it)
*Papas taste best when served hot

Did you eat papas or a special homemade porridge while you were growing up?  I would love to hear about it!